Review of Masla’s 30 year retrospective exhibition Near and Far, at the R. Michelson Gallery

The culmination of 30 years worth of art making by Ashfield artist Robert Masla will be on display at the R. Michelson Galleries in Northampton from March 9 through April 26th , 2007. Titled “Near & Far, A Retrospective” this show is an extraordinary view into the life and evolution of one artist’s artistic vision.

Masla has been painting landscapes since his very first painting was executed at age 11 while studying under the direction of Alton S. Tobey, a 20th century Realist painter and muralist. Masla later went on to receive a diploma from The School of the Museum of Fine Arts in Boston, a Bachelor’s of Fine Arts Degree from Tufts University and a Masters degree from City College, City University of New York.

It was during the 1970’s, while living in Boston as a young art student still barely through his teen years that Masla displayed an exceptional passion for life and art as a symbiotic creative endeavor. Masla, to his art teachers’ great consternation went so far as to open his own alternative fine art gallery. He would then spend the next 30 years putting his intellectual, artistic and spiritual philosophies through the rigorous test of time and personal growth by painting.

Although Masla has, at different times of his artistic career painted a variety of subject matter, landscape has been the one true constant. Having coined the term “Spiritrealism” long ago, Masla has fully embraced all that is exceptional as well as mundane in the everyday world around us. By painting the landscape, Masla essentially offers his viewer, as well as himself the opportunity to see what we may have passed over before, and to experience it in a new, inspiring and hopefully passionate way.

“Weâ€™re given the opportunity to participate in creation every day of our lives,” explains Masla. “Creating art is a form of worship, a form of spirituality born through creative living that connects us to the cultivation of humanity.”

Masla’s landscapes are powerful representations of a natural world you may not have fully noticed before. Whether he is painting the magnificent spray of water from the Niagara Falls in a monumental sized painting titled “Horseshoe Falls,” or the tiny lines in an otherwise ordinary piece of rock from Arcadia, Masla is extraordinarily passionate about every tiny detail. It is precisely those details that contribute to an overall surreal and otherworld sensibility. Masla believes in the inherent power of nature. His landscape paintings attest to this belief. They are rejuvenating and healing, filled with wonder, awe and revelation. 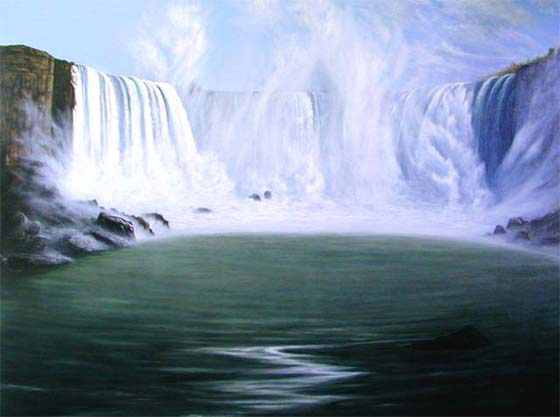 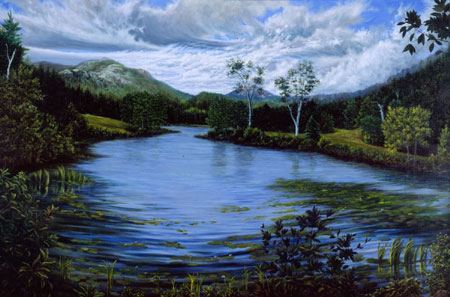 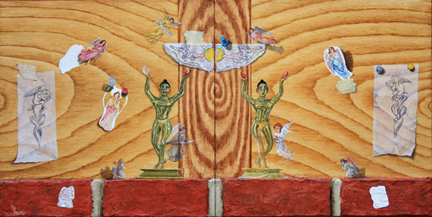 Show Me An Angel, Masla, diptych, oil, alkyd and acrylic modeling paste on 2 panels, each 12″ x 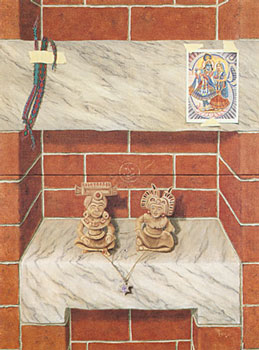 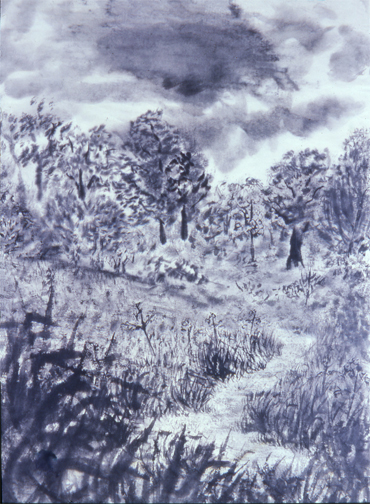 Masla also loves symbolism. His artwork is richly filled with it. A series of still life paintings beautifully executed in the trompe l’oeil style during a particularly painful time in his life are filled with symbolism. Masla himself seems amazed at the sheer volume of allegoric representations of his own very personal state of mind in these paintings. Spilling forth after the loss of his parents along with the frightening onset of glaucoma, Masla understands now that he was simply trying to find a sense of control and order in an otherwise chaotic and emotionally turbulent time in his life.

Also on exhibit are many of Masla’s earlier works, including several important self-portraits, watercolors and a Sumi brush painting landscape that was created when he was still just a student at the School of Museum of Fine Arts in Boston. To this day Masla will begin a painting using his sumi ink and brushes directly on the picture surface, before toning the canvas and painting in the highlights.

Masla’s most recent work has been created with the use of a computer. Digital collages using maps, images and montages from previous work are composed by Masla on his computer, and then printed onto canvas. Masla will then go back into the piece with brush and paint further blending and blurring together illusion and reality. “True North” is a compelling and important example of this new body of work where Masla is searching for the true essence of spirituality in something as simple and inherently lovely as a seashell. 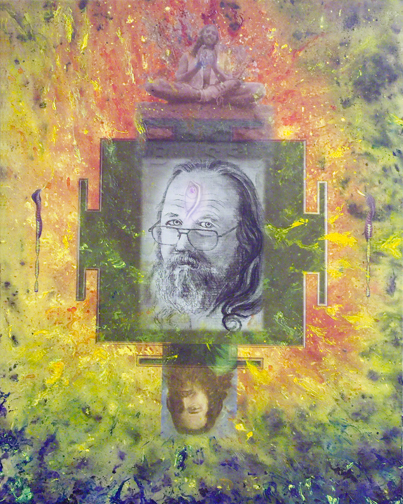 Kalya Tapasya,(The Transforming Power of Time), Masla, 2007, 40″ x 30″, mixed media digital collage painting, combining images from 30 years of painting, including, in the center, the underpainting of Self Portrait Turning 50 which was painted with sumie brush and ink on panel 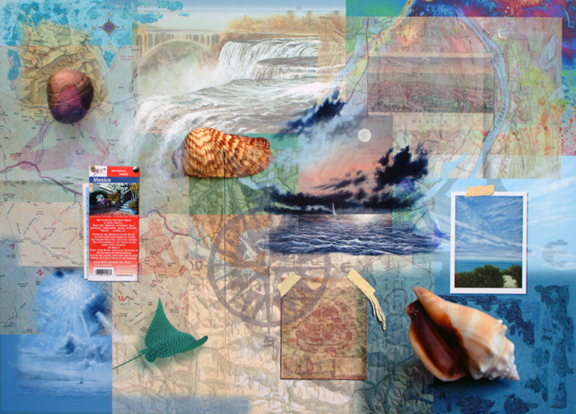 An exhibiting artist for over 25 years Masla’s artwork has found its way into many private and corporate collections. His teaching experience is extensive, having lectured and taught painting, drawing and art history at numerous institutions of higher learning throughout the Northeast. As the artist in Residence for the city of Springfield, MA Masla was the creator of the A4E (Art for Everyone) Program, which was awarded 3 consecutive grants from the Mass Cultural Council.

Most recently Masla, along with his wife, has established a glorious southern studio located just 10 miles south of Puerto Vallarta on the west coast of Mexico. Masla invites you to join him in any number of weeklong painting, drawing and creativity workshops offered and taught by any number of established artists as well as Masla himself.

“Near and Far, A Retrospective” will be on exhibit at the R. Michelson Gallery located at 132 Main Street in Northampton from march 9 through April 26, 2007. An artist reception, in conjunction with the Northampton Arts Night Out will be held on Friday March 9 from 6:00 p.m. to 8:00 p.m. For more information or to see more of the artists work, please contact the gallery at 413 586-3964 or visit www.RMichaelson.com. To contact the artist directly or learn more about workshops at the Casa de los Artistas call 413 625-8382, email at bob@maslafineart.com or visit www.ArtWorkshopVacations.com or www.Maslafineart.com

← In Praise of Alkyds
Sharing in an Artists’ Dream →