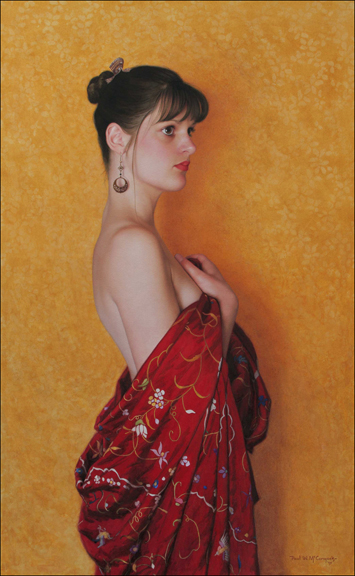 Paul W. McCormack was born in Rahway, New Jersey in 1962. He received his formal art training at DuCret School of the Arts where he later became a faculty member. Sharing his knowledge on the fine art of portraiture, he has also served on the faculties of the New Jersey Center for the Visual Arts, the Center for Contemporary Art, and the Newark Museum. He has also conducted workshops at various institutions, including the Andreeva Portrait Academy, and the Bay Area Classical Arts Atelier. He is now currently teaching classes and workshops in his private studio located in the Hudson Valley region of New York State. Paul has enjoyed a successful portrait career for over 25 years with a long affiliation with Portraits Inc. in NYC.  Now returning to more personal works he is currently represented by Cavalier Galleries in Greenwich, CT. His paintings and articles on portraiture have been published in numerous national and international publications and books. His paintings have appeared on 2 covers of the Artist’s Magazine, first in 1998 where he won First Place in the Portrait Category in their annual competition. Throughout the years he has been the recipient of many awards, including the recent “2014 Gold Medal of Honor” from the Allied Artists of America 101st Annual Exhibition, and the“2012 Silver Medal Award” from the Oil Painters of America National Juried Exhibition. Paul is the current President and a founding member of ACOPAL, the America China Oil Painting Artists League.

See more of Pauls’ work on his website: http://www.mccormackstudios.com